DIARY: Back To Reality!

We are back from the tornado of comedy that is the Edinburgh Fringe Festival! Our 9th run at the biggest arts festival in the world and we think we are getting the hang of it. We had an absolute blast and believe it or not we did two shows every single day… 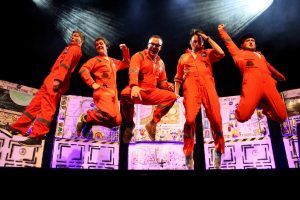 At 3pm we blasted off with our family friendly ‘Really, Really Good Afternoon Show… In Space’ in the spectacular Debating Hall at The Gilded Balloon. We had robots (Charlie in a cardboard box), asteroids (Matt and Sam running around with balloons on sticks) and even evil chin aliens (Both Toms and Charlie depending on who was free at the time)… Every day was a total delight and the 350 seats in the auditorium(!?) were full more than we dared to hope for.

We’d like to thanks everyone who came and our amazing technical team who made space look and sound so damn good.

“It is delightfully silly at times, very clever at others but totally entertaining for all ages throughout. It doesn’t matter if you are seven or seventy, it is impossible to not have fun and get involved with the mayhem!” 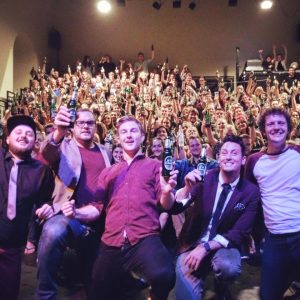 At 10.50pm every night we we’re back with our beloved ‘Comedy Lock-In’ in our old stomping ground Pleasance Two in The Pleasance Courtyard. We had a cavalcade of guests including comedy legends Phil Nichol, Tony Law, Marcus Brigstocke! We had mind reader Chris Cloud who literally read Sam’s mind. We had beatboxer Shlomo who blew all our minds. We were even lucky enough to spend one night with the hero of 90’s children TV… Dave Benson Phillips. Yes really… There’s a video of THAT coming soon. Special mention should also be given to the brave souls that we literally plucked out of the courtyard and dragged them into the middle of the show and a deafening scream for our audiences.

Thanks to our tech team, our audience and the good folk at Chang who kept us in delicious beer for the month. They were so generous in fact that on the last night we gave EVERY audience member a free bottle to enjoy during the show!

“Overall, the show was like hard-hitting medication for Comedic ADHD – leaving the audience breathless and howling for more. All in all, The Noise Next Door’s Comedy Lock-In is a phenomenal show.”

The Noise Next Door