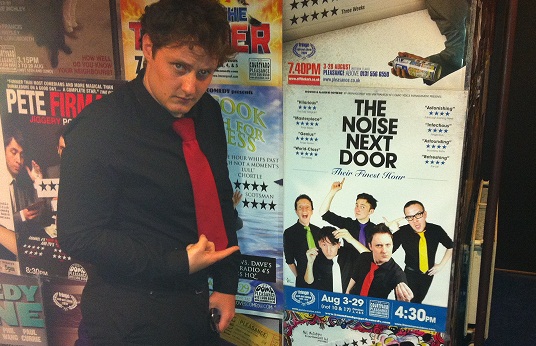 Well, well… Here we are at THE Edinburgh Fringe Festival. It’s the largest arts festival in the world, it’s the cultural centre of the comedian’s year and it is, for the next month, our home.

This is our fourth year at the Fringe and whilst we don’t feel comfortable with the term ‘veterans’, at the very least we know the ropes. Our first week has been spent massively enjoying our hour long show at 4.30 in the buzzing Pleasance Courtyard, chatting with media folk of both printed and broadcasted varieties, and catching up with old friends and disrespecting our livers at various launch parties, bar crawls and illegal gambling rings.

Our highlights from the show include an excellent rendition of Christopher Columbus’s discovery of America, an unexpected duet between Elvis and Tom Jones and the climactic tension of one of our Joke Off  tiebreakers being broken by… a  blaring fire alarm and the threat of a venue wide evacuation. Madness always!

The weekend was a little unusual because we spent our evenings (valuable drinking time) heading over to Glasgow to headline at the raucous Jongleurs comedy club in the city centre. Filth was abound but everyone enjoyed themselves… Also, we got steak. TWICE.

In review news, the fine people at Chortle came to our very first show and wrote a quite lovely review. They said things like “fantastic” and “sublime comedy” and they gave us four stars! Huzzah! The full review can be found HERE…

All in all… Good times.