The Long and Winding Road (to Edinburgh) 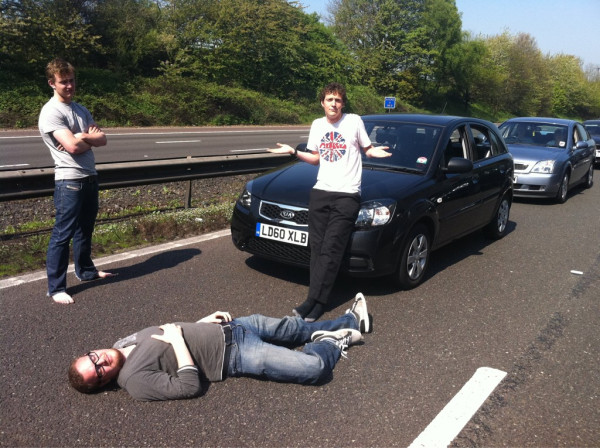 Travelling extremely long distances, in exceedingly cramped conditions is one of those things that, as a comedian, you just have to get used to. In fact we reckon, that if they invented molecule transportation that we would have the best job in the world… As it is we’re happy enough with second place after Lion Tamer.

This last week there was a good load of travelling as we previewed our Edinburgh show on our way up to bonnie Scotland. We rolled up to Birmingham to perform at The Station comedy club alongside Noise Next Door pal Karen Bayley. The black country crowd orchestrated us in an hour of total madness that ended in an encore song that included a mass Macarena.

Next up was a weekend in Newcastle Jongleurs with some more old friends in drinking buddy Rich Wilson and 2009 Fringe mate Des Clarke. (Cracking comics both. If you can, check them out.) The whole bill went for a day trip to see Captain America too. (Noise Rating: *** Fun but unspectacular. Stay after the credits for a total nerdgasm.)

Finally it was Cramlington’s infamous ‘Punch Drunk Comedy Club’ with Kai Humphries. This show was undoubtedly the filthiest evening of comedy we’ve ever been involved in but the bloodthirsty Geordies in attendance lapped it up… And so did we. Who doesn’t like a bit of smut every now and then?

The familiar Weetabix-meets-gravy smell of the city, the comforting rainforest’s worth of flyers and the constant drone of bagpipes means it’s Fringe time… We couldn’t be happier!